At Omelo we’re keen on convex mirrors and we’re keen on art. So we came up with the genius idea of a blog series on Convex Mirrors in Art. You may have read the first part in this series already.

There is huge amount of art featuring convex mirrors. Sometimes used for their symbolic meaning (vanity), but in many cases simply an excellent device for artists to showcase their skill – have you ever tried painting a convex reflection?! 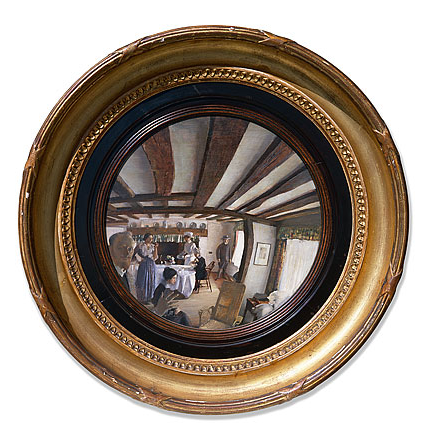 This painting presents a group of people in a convex reflected image. They stand in the low-beamed living-room of Belwethers, a cottage in the village. Lambert accurately captures the way the convex mirror widens the scene. He depicts mistresses and maids, the daily ritual of tea and domestic life.  And, looking out of the image in the foreground is the artist himself.

Reflected scene of domesticity in England

It really is a masterful depiction of a room viewed through a convex mirror. There are many more paintings in galleries around the world depicting convex mirrors and convex reflections. Next time, an Italian Renaissance masterpiece..!

You may also be interested in the first part to this blog, Convex Mirrors in Art.