The Convex Mirror in Art: Three Ages of Woman

The Convex Mirror in Art is a new series of blog posts we’re introducing, based on our love of the convex mirror and art.

So, in this our first article featuring the convex mirror in art, we bring you an intriguing and rather sinister 16th century painting.

The Three Ages of Woman and the Death, painted in 1510 by German artist Hans Baldung. 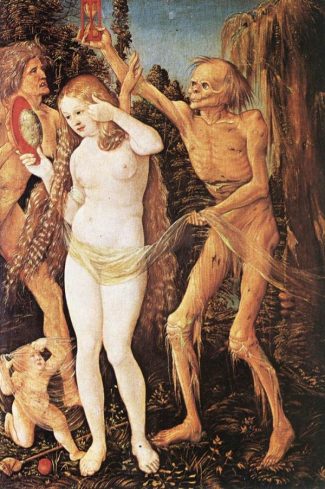 The Three Ages of Woman & The Death

The painting represents the ages of woman in the constant presence of death.

The old woman in the painting faces death resolutely, trying in vain to ward him off. The young woman, whose strong, nearly white body contrasts starkly with the half-decayed figure of death, takes no notice of him. Instead, she regards herself in a convex mirror; artists regularly used mirrors as a symbol of vanity. Death holds an hourglass – not yet run out – above her head, a reminder of the transience of life. The infant on the ground embodies the first stage of life, viewing the world with innocent eyes, as through a veil.

It’s creepy and captivating all at once! Don’t you think?

If you liked this post, you may find our subsequent article Convex Mirrors in Art Part 2 of interest.