Gold – a precious metal associated with wealth and prosperity – has been used to impress since the beginning of civilization.

Ancient Egyptians as far back as 3000BC used gold leaf to gild their sarcophagi and their entombed offerings to the gods. Gilding with gold leaf has been used extensively ever since, to enhance inferior materials such as copper, bronze, stone and wood, and to embellish furniture and decorative accessories.

Gold leaf is gold that has been hammered into thin sheets by the technique of ‘beating’ – a technique which dates back to the Ancient Egyptians and then involved manually hammering gold into thin leaves.Watch Full Movie Online Streaming Online and Download

The illustration below from an Egyptian tomb (circa 2500BC) depicts the melting of gold with the assistance of blowpipes and the beating of gold by hand using a round stone. By the 18th century, with the invention of the roller mill and the cast iron hammer, the production of gold leaf was only slightly less arduous.

This image illustrates how a gold beaters workshop was organised in the 18th century.

Gold was melted in a furnace (a), cast into ingots (b) to be passed repeatedly through a rolling mill (c) before being hand beaten with a hammer (d) and finally snipped into squares (e) ready to be used for gilding.

Beating gold by hand required total control of the hammer and great precision of the eye. Notwithstanding the advancement in tools with the introduction of the roller mill and the cast iron hammer, gold beating was still a demanding and laborious process.

Today, beating is done by machine, rather than by hand, resulting in a leaf of higher quality and consistency. Because its supply is limited, gold continues to be an expensive and valued commodity, and a hugely popular choice for the gilding of mirror frames. 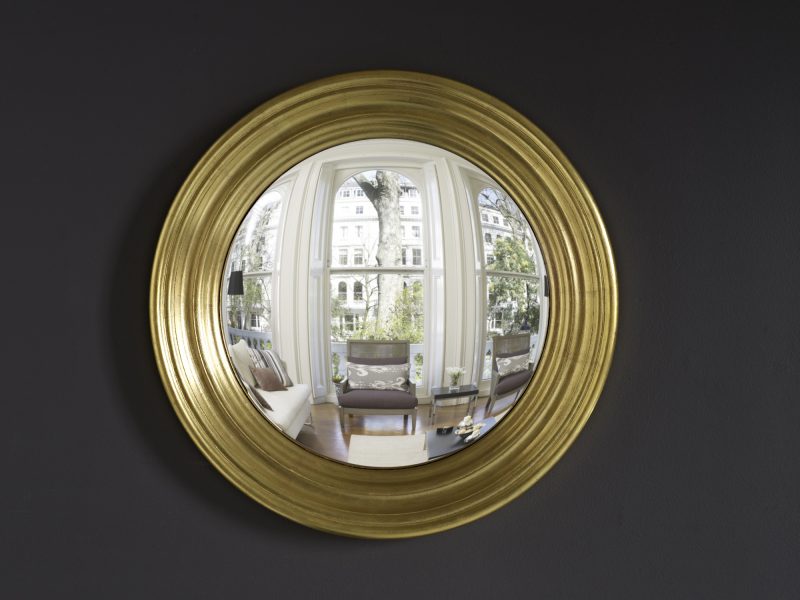